A touch of glass: How Heywood House’s conservatory was brought back to life

Turning the historic Jacobean Heywood House in Wiltshire into a business centre involved a lot of restoration work to transform it in to the modern business environment with all its hi-speed broadband, office space, meeting rooms, event space and co-working area. It has been a long road with many twists and turns but the journey which begun almost 14 years ago has finally reached its end and the spectacular Victorian palm house that adjoins Heywood House in Wiltshire is now back to its original glory. 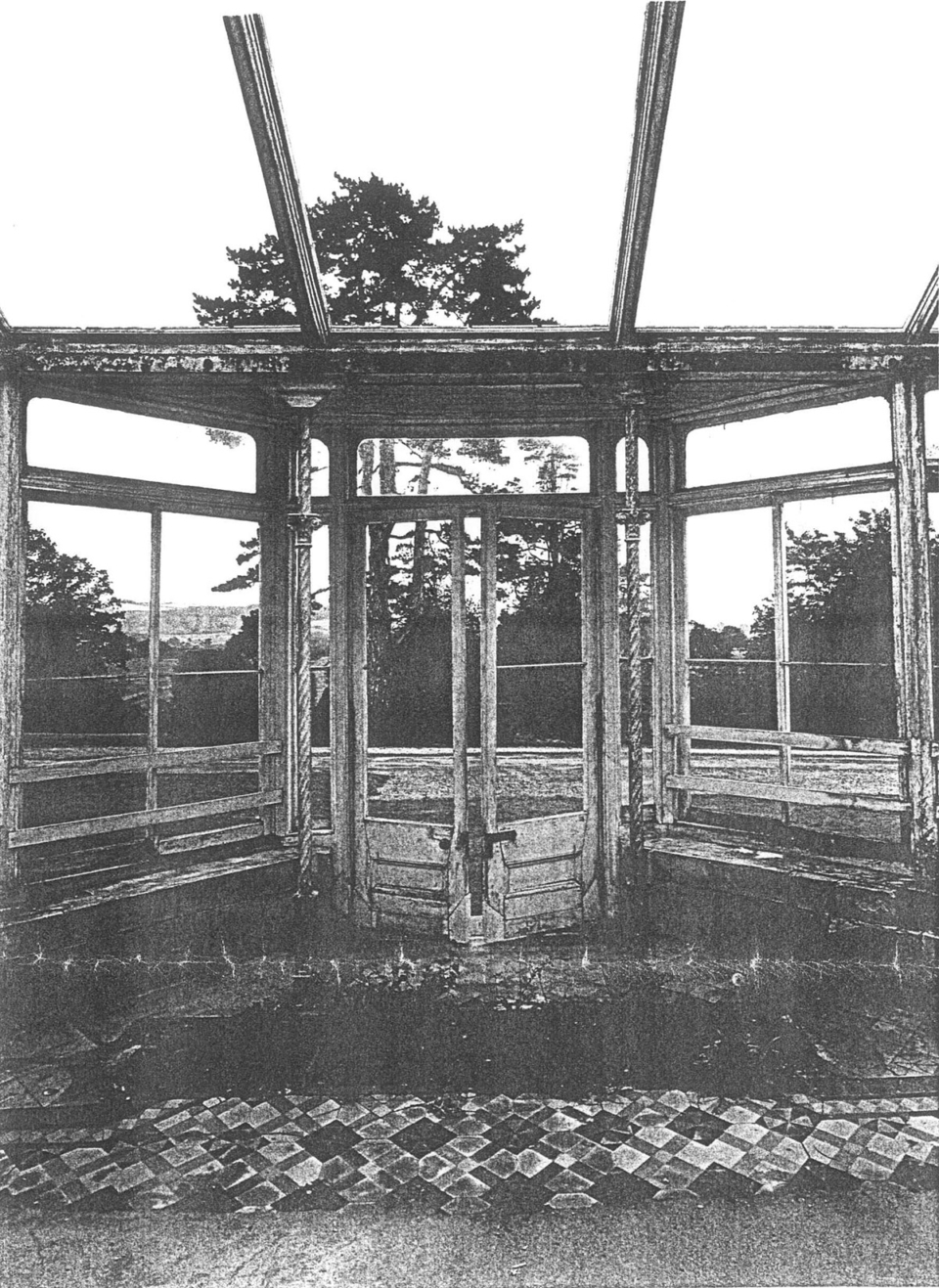 When owner Chris da Costa first bought Heywood House from the National Trust in 2005 the conservatory was in a desperate state, despite having been renovated less than 20 years earlier.

“Restoring the conservatory was the most challenging thing we had to do because English Heritage (now Historic England) were saying there wasn’t much of the original fabric and minimal historic interest but the design was original and we were determined to try to save it.” says Chris. 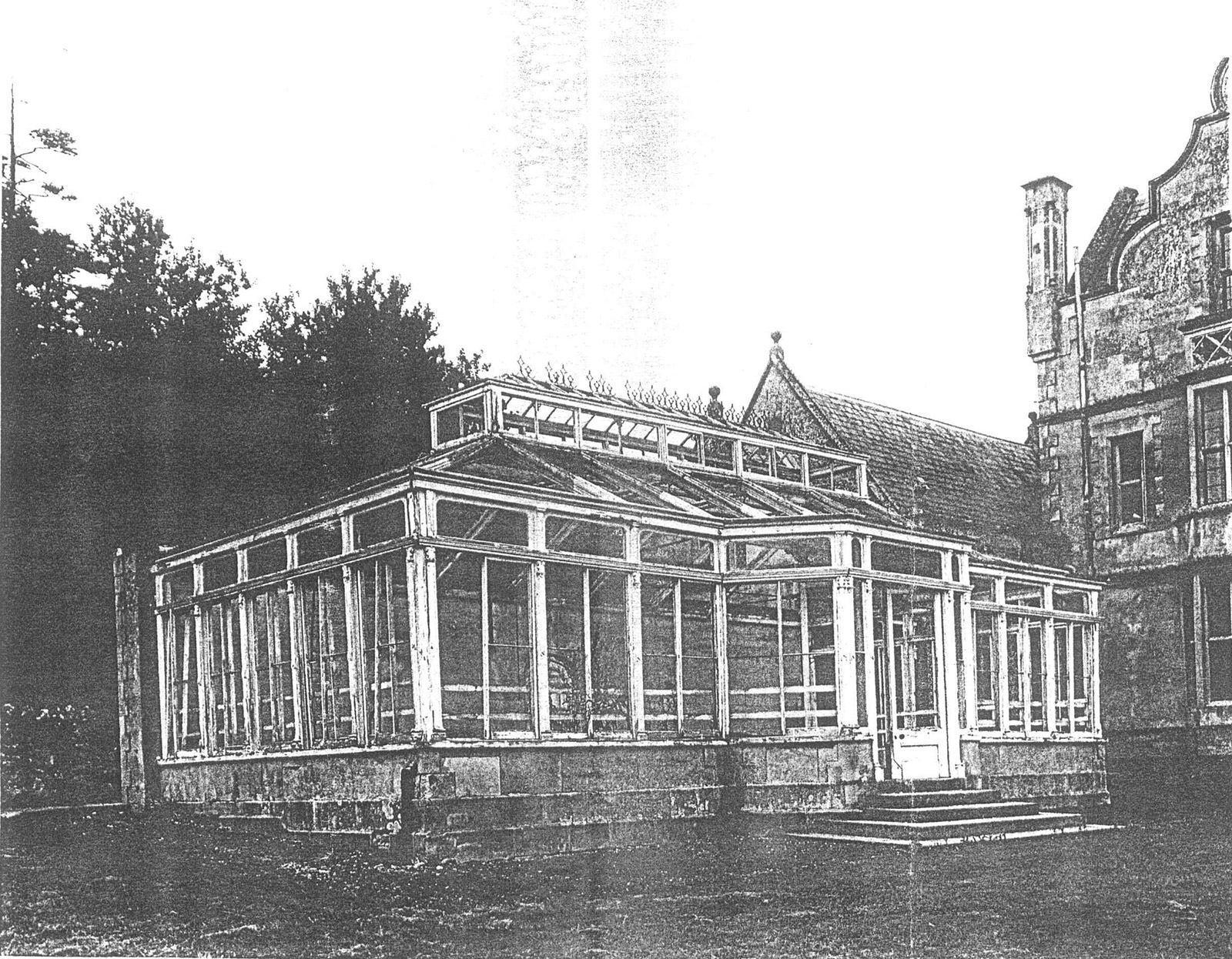 The Conservatory before the National Trust owned Heywood House

The exact date the conservatory was built has been lost in the mists of time, although a building listing of Heywood in 1849 records its presence. Even then the listing notes it as having missing glazing.

It was one of a number of glasshouses dotted around the estate, reflecting the Victorian mania for growing exotic fruits and plants. Besides the palm house there were separate glazed and heated domains for vines, peaches, melons, carnations and various plants.

The glasshouses may have been there even earlier though. They had been prevalent in England since the middle of the 16th century when they were used to grow oranges. The window and glass taxes of 1696 and 1746 elevated glasshouses to the province of the super-rich and they became status symbols.

In 1849 the house was owned by the philanthropist Henry Gaisford Gibbs Ludlow, who came from a wealthy family of clothiers.

In 1837 he rebuilt Heywood House but it was far from the only work he did in the area.

He also built a first school for the village of Heywood, which remained open until 1971, and an Anglican church, Holy Trinity, which held services there until 1981.

After Henry’s death (and burial in the Holy Trinity churchyard) the house was sold several times until it lay unoccupied from 1922 to 1934. 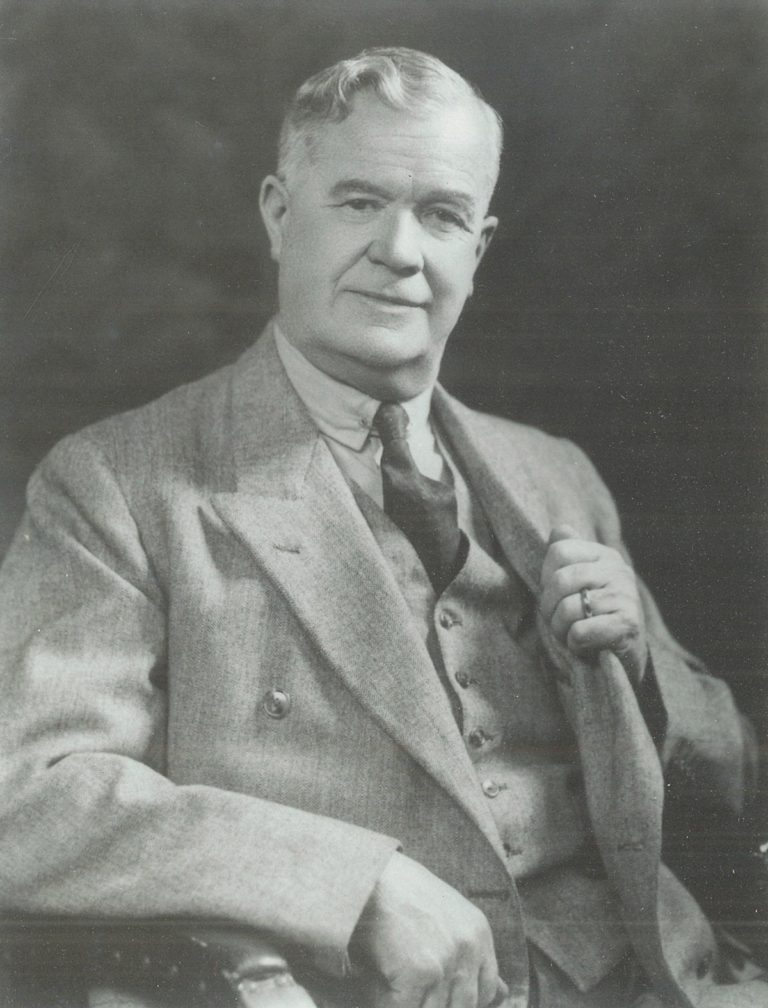 It was eventually bought by Sydney Herbert Barnes, whose family built steam rollers in Southwick and sold them all over the country.

Ironically for a man whose wealth came from flattening things, Sydney used his money to raise standards at Heywood and invested heavily in restoring parts of the house.

The condition of the conservatory at that point remains a mystery but we know that when the house was bought by Edmund Rosser Rees after Sydney’s death in 1964, he had a very different vision for it.

Edmund re-opened Heywood as a school for boys, obviously keen to utilise the house and its grounds to educate and inspire young men.

The house still had a lake but Edmund must have wanted some water closer to the house itself where an eye could be kept on his young charges and he saw an opportunity in the delipidated conservatory. Its floor was dug out and a swimming pool installed where once exotic palms had grown.

When the National Trust bought the house in 1982 to house its marketing and finance departments the conservatory was undoubtedly at its lowest ebb. Although most of the timber structure remained, it was rotting away and not a piece of glass remained. The five years that passed before the Trust decided to act, and the attendant wind and rain that fell on the structure, didn’t do the wood any favours either. 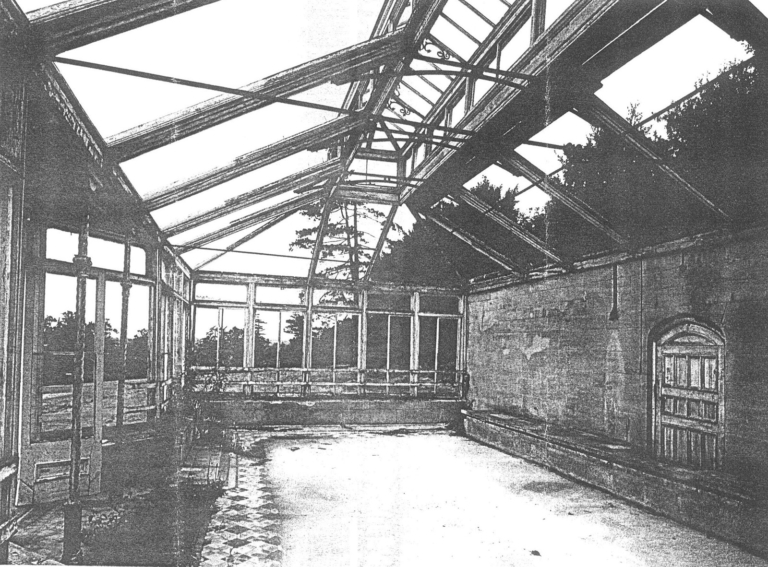 Heywood House Conservatory before its Restoration

In October 1987 the Wiltshire Times reported on the dilemma faced by the Trust.

“To spend money on a structure that would not directly benefit the public and members, or to remove it and sample the wrath of those who consider that the local landscape would be poorer and the house aesthetically ruined,” it pondered.

The truth of the matter is that it could have easily swept away the conservatory and justified the move by saying it was opening up the left side of the house to its original Jacobean state.

But thankfully the Trust enlisted the help of students and lecturers at Trowbridge College to completely restore and rebuild the conservatory over three years.

But by 2005 when Chris bought the house, the conservatory’s wooden structure had once again fallen victim to the elements. “It was just about waterproof when we moved in,” he recalls.

Although outwardly sound, running repairs on the timber roof became increasingly dangerous because leaning ladders against the fragile structure put too much pressure on sections that had hidden rot.

“The advice we had was that doing piecemeal repairs was no good as the whole thing could just collapse,” says Chris.

Instead he set about coming up with a reconstruction scheme that combined preserving the original design and features with modern improvements to protect it for the long term.

It was not as simple as just replacing what was there, the project needed to have longevity built in.

A key decision was to replace all the timber with a reconstituted wood material called Accoya, to increase weather resistance.

The top section, called the lantern, was built separately and fitted with automatic vents, which combine with ultra-thin double glazing to moderate the temperature inside and prevent the structure from expanding and contracting. 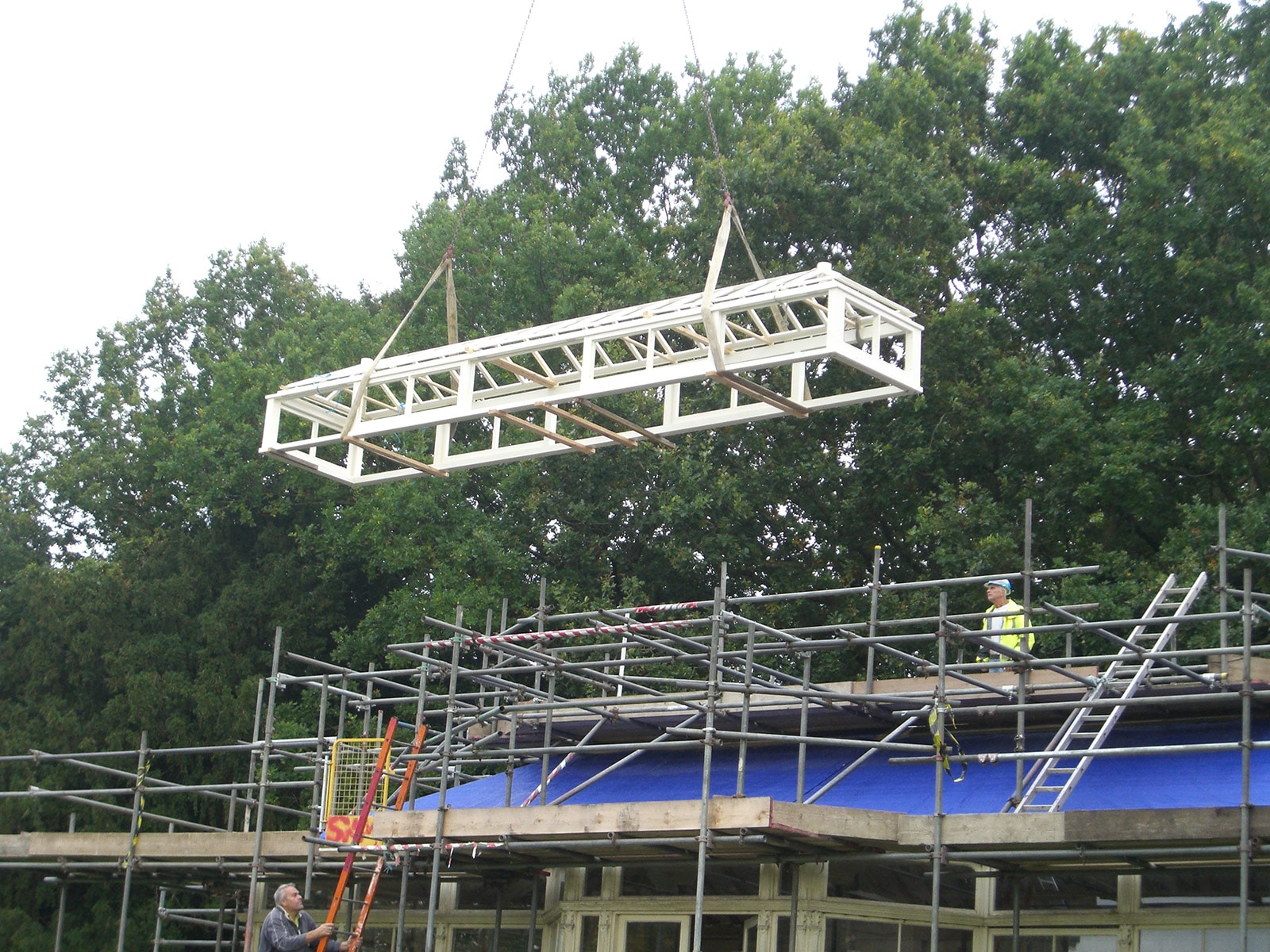 The results are now there for all to see with a café providing snacks and meals within the light and airy conservatory for tenants and members.

With a variety of membership offers available you can choose to work inside the old palm house as your base, or work in the Mansion and use the unique business environment at Heywood House including the meeting rooms, grounds and outdoor space.

Had it not been for the foresight of a National Trust visionary and Chris’s determination, the conservatory would be just another slice of the half-forgotten past instead of a vibrant part of the present and future.

Says Chris: “Restoring the conservatory generated great teamwork and it is wonderful to see the place full of people – as well as a few palm trees.”

Come and see the website to discover more about Heywood House or arrange to come and see us on site and we can show you all the wonderful facilities here and try the delicious freshly ground coffee for yourself!