Heywood House in Wiltshire is a business centre with a myriad of stories in its past. Our research on the history of Heywood House revealed a First World War story of recuperation, care and wellbeing, which really stood out. 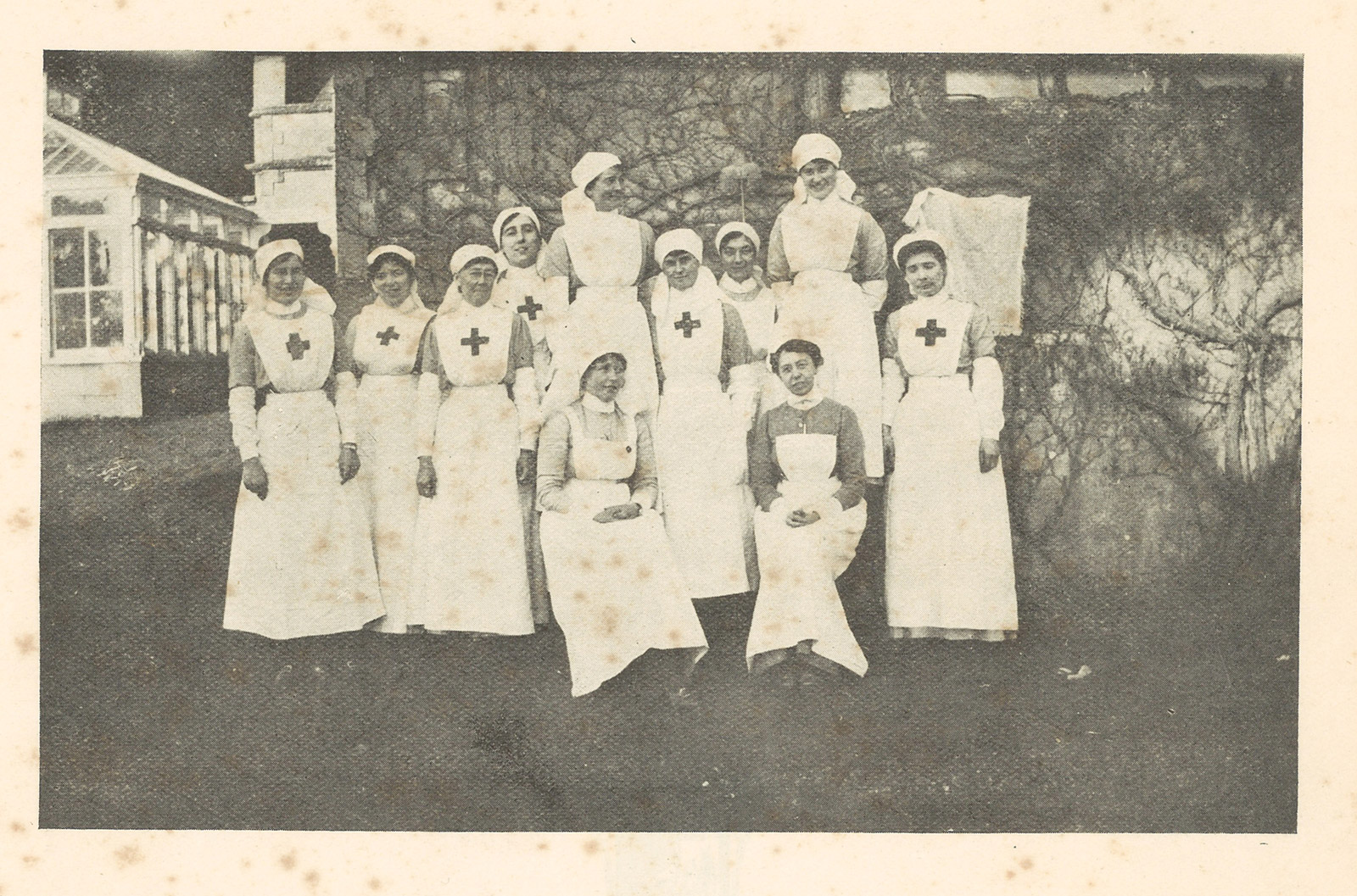 In light of it being the centenary of the end of the First World War this year it seems fitting to start our blog with a look back at the war effort and tell the story of Heywood House.

In 1914 when war broke out, Heywood House was owned by 2nd Baron Ludlow, Henry Ludlow Lopes, a Barrister and staff captain in the First World War. Although he owned Heywood House for 23 years (1899 to 1922), he only lived here for three years. In 1902 he let the estate as he was based in London.

This postcard from the time shows what Heywood House looked like- not too much different from today! 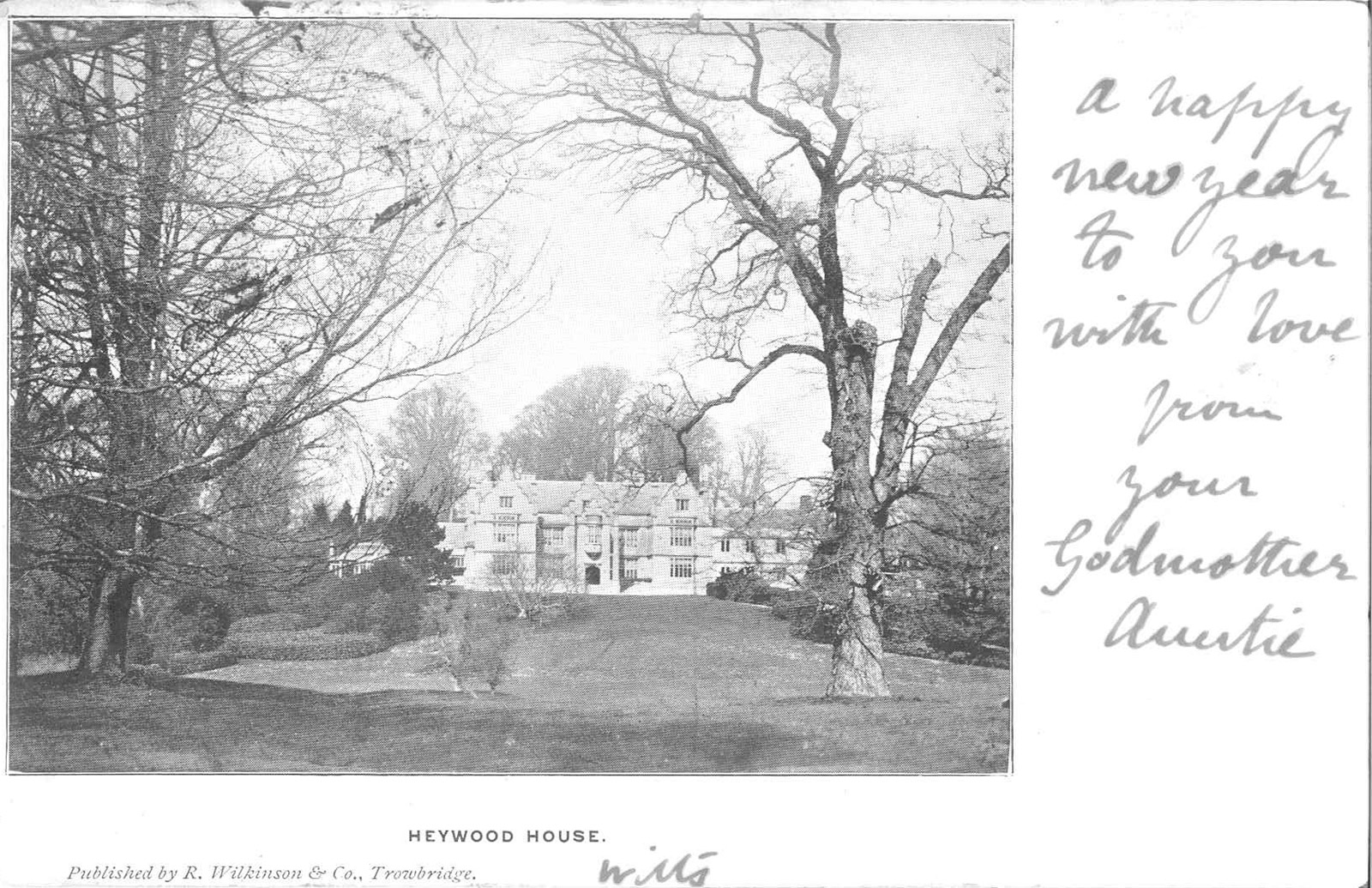 The House was positioned in its own estate, and was occupied by Mr and Mrs Malcolm Lyons from 1914-1920.

They turned Heywood House into an auxiliary hospital for wounded soldiers soon after they moved in. It was a place soldiers could rest, recover and recuperate from the injuries and trauma they had endured.

It was a real family affair with their daughter volunteering to be a nurse at Heywood House. 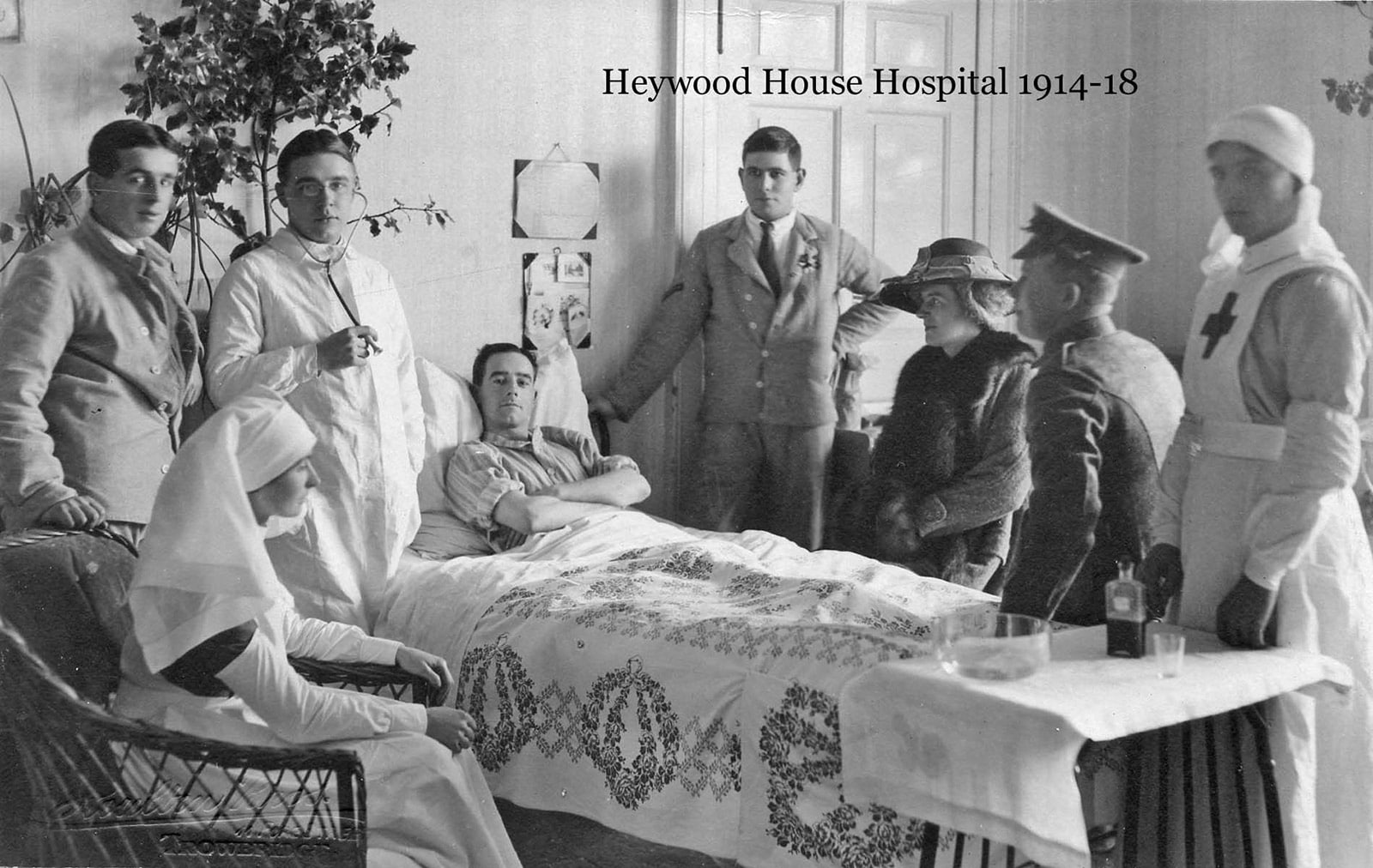 The War Office paid grants to hospitals for every patient they looked after, and the grant amount increased annually during the war. At the highest rate, the government paid £1 4s 6d per week, or £63 14s 0d per annum, for each patient. This covered full hospital treatment, food and other costs.

Wounded soldiers started arriving on site from 1914. Patients generally did not have life-threatening injuries and needed time to recover. Servicemen often preferred the auxiliary hospitals to the military hospitals as the discipline was not as strict, conditions were less crowded and the surroundings were homelier.

The House was split into wards for the recovering patients, ready for their arrival, by car or wagonette as seen here in 1917.

Interestingly, the front of the house was covered in ivy which it no longer is, and the old extension to the building which was later removed can be seen in the background.

The environment here at Heywood House would have been a totally different world from what they had been exposed to in the Great war. Having somewhere green and peaceful to rest and recover in must have been a real help.

Many of the soldiers are photographed out in the grounds, as can be seen here situated on the front lawn in 1917. Mr Lyon’s Valet Sergeant Doyle can be seen in the dark suit on the left of the picture.

The soldiers had dogs on site which may well have aided their recovery. The conservatory can be seen on the left of the photo. Staff, Soldiers and Mr Malcolm Lyons can be seen here on roller for the front lawn in 1917.

The local Voluntary Aid Detachment (VAD) were local volunteers trained in first aid and home nursing. It was often local women who volunteered in the hospitals part-time. There were also some paid roles, such as cooks.

This is Dora Francis who was aged 20 when the photo was taken in 1918. Dora lived in Westbury with her family and volunteered as a VAD nurse at Heywood House upon her return from The University College London. 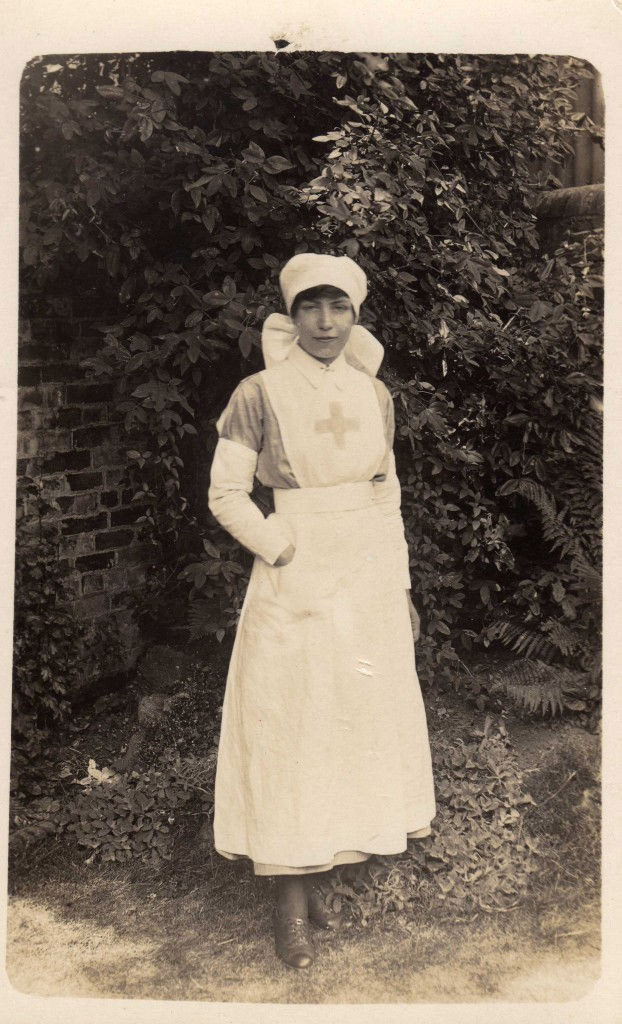 Volunteers who worked at auxiliary hospitals were usually too old or young to work in a military hospital. Caring for the wounded soldiers was their primary role and was vital in the war effort.

The team of nurses at Heywood House can be seen here on the right in 1917 taking a moment off duty with their equipment.

Nurse Evetts here on the right, was one of the editors of Ye Heywood Lyons Magazine, which first started in 1916. Mrs Malcolm Lyons can be seen above surrounded by the nurses on the terrace at the front of the house.

Volume 1 of Ye Heywood Lyon Magazine was first printed in November 1916 and was produced by the staff and patients, featuring articles, poems and tales of life in the trenches as well as stories, jokes, photos, and other entertainment to aid the soldiers’ recovery. 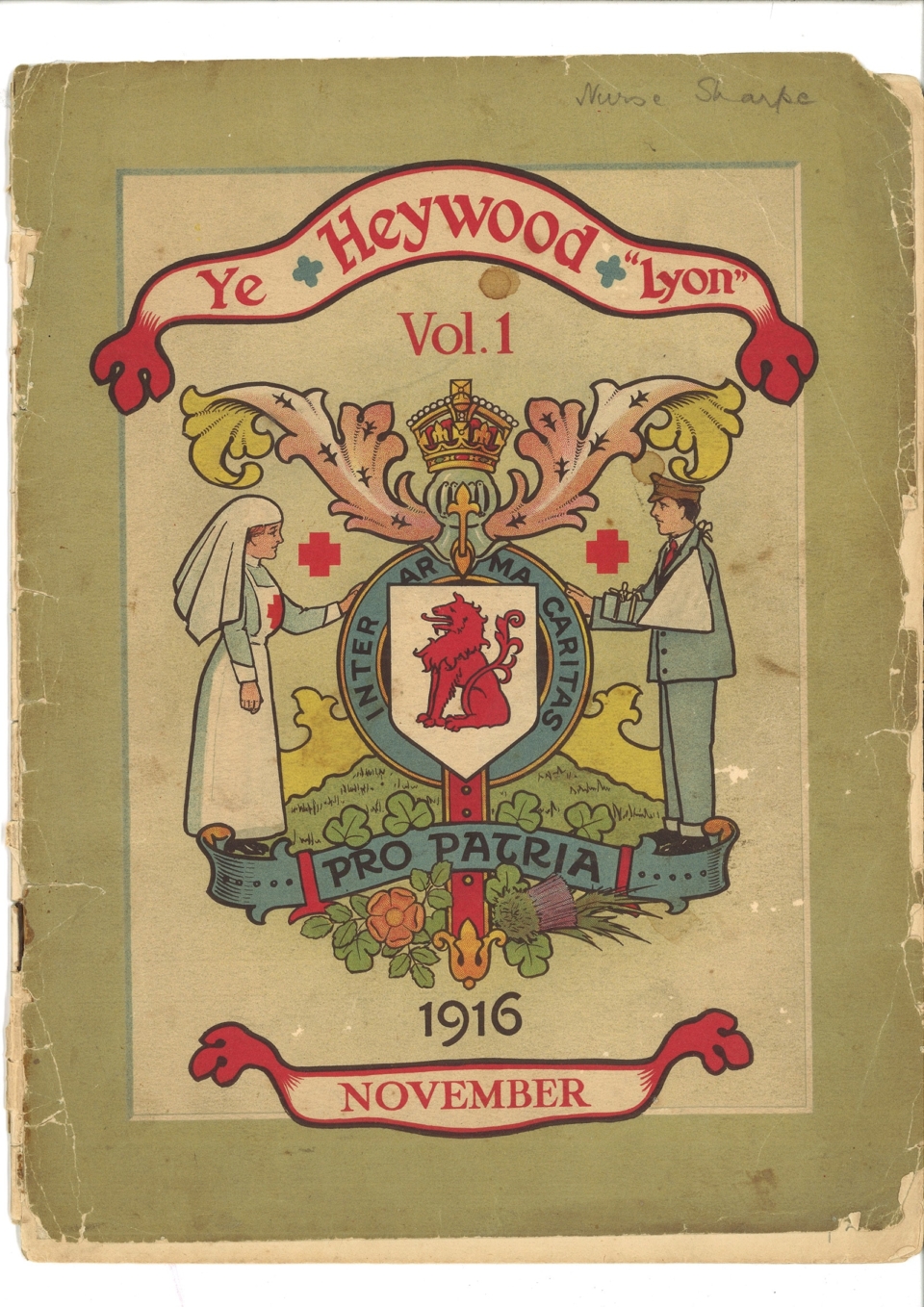 Mr and Mrs Malcolm Lyons were also editors of this magazine and can be seen here with the nurses at the front of the Mansion. 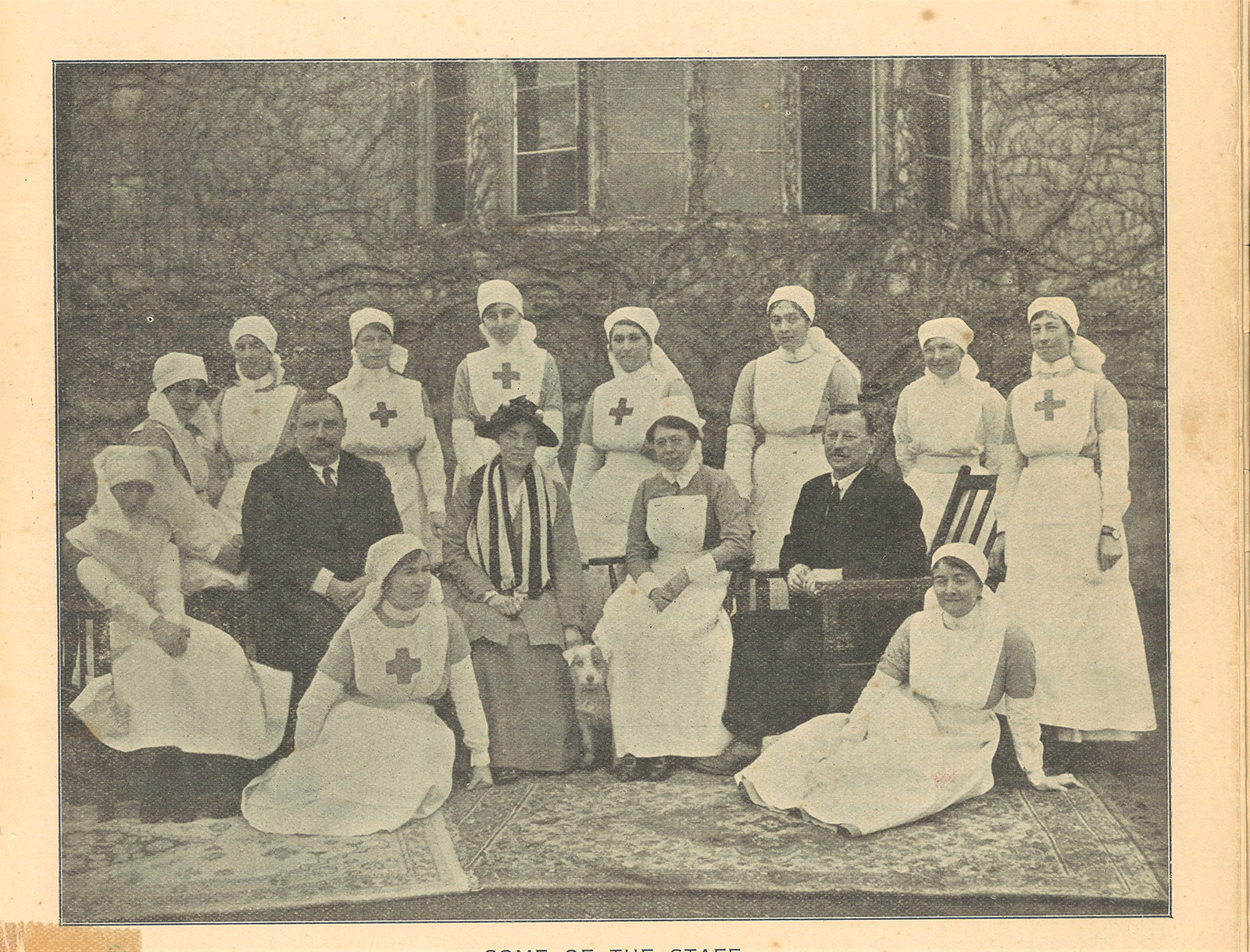 Many of the photographs we found in the Wiltshire and Swindon History Centre were from Ye Heywood Lyons Magazines, and they have been such a valuable primary source of information to show us what life was like at the time.

From clothing to equipment, to décor, to how the rooms were used and what they used to do in them; it’s fascinating to see how buildings were used in a different time!

Just look at the wallpaper in this photograph of ‘F Ward’ where the soldiers are making a car for the Christmas production. 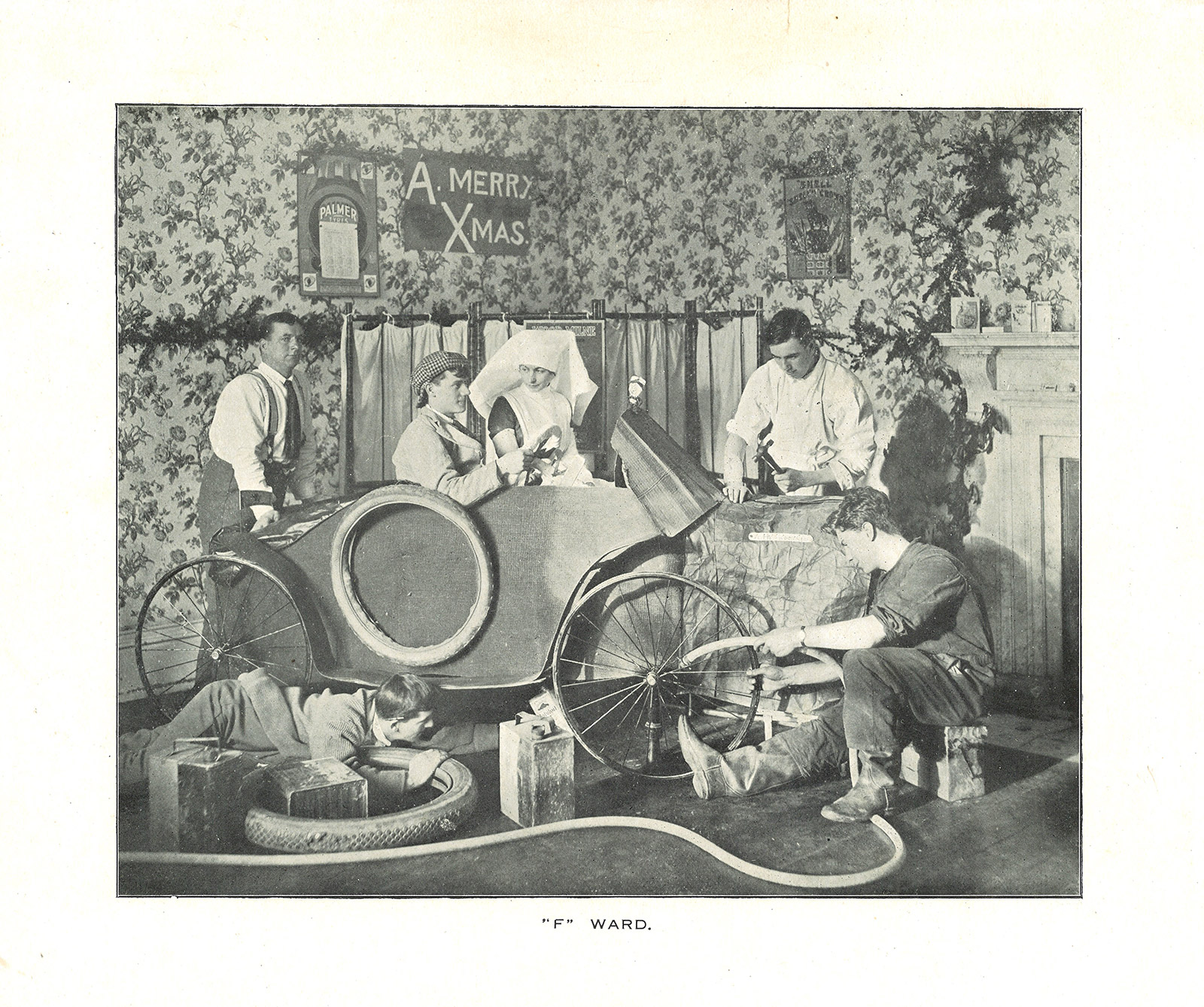 Former patients praised the happy atmosphere at Heywood House Hospital under the caring direction of Mr and Mrs Lyon. There were concerts, outings, and parties to lift the spirits of the patients.

This photo is taken at Shearwater, which is a lake on the edge of the Longleat estate. The soldiers are likely on a day trip. Mr Malcolm Lyon’s is in the centre of the first boat and his Valet Sergeant Doyle is on the left of the picture. 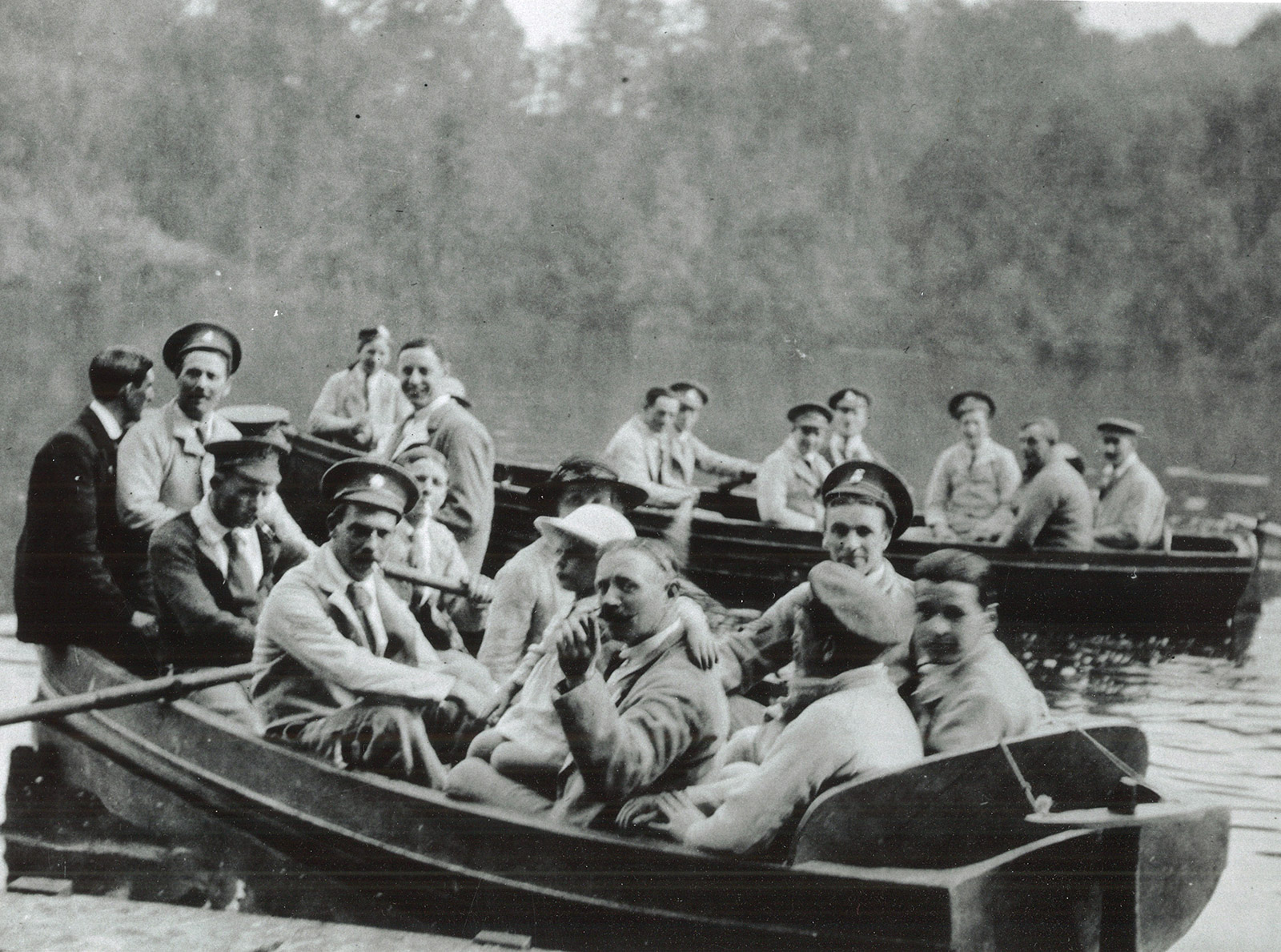 Soldiers were encouraged to contribute to the magazine, as were staff. This pencil sketch of Heywood House shows the front of the house and the shrubbery on the right is where the topiary garden is today. It was done by Nurse Millar, who can be seen seated on the ground on the right-hand side of the photo at the top of this section with Mr and Mrs Malcolm Lyons.

There was music on site helping create a homely atmosphere and likely featured in many of the events happening on site. The above photo is from a 1917 edition of Ye Heywood Lyons’ Magazine and is titled ‘The Musician’. We are not sure what instrument he would have played, but I feel it may have been a brass instrument of some kind!

The grounds at Heywood House were used in all weathers and many of the soldiers benefitted from their time outdoors.

When the snow came or ‘The frost’ as it is called here, it seems a bit of sledging was definitely taken up as can be seen from the tracks on the front lawn here.

Christmas 1917 was a big feature in Ye Heywood Lyons Magazine. These photos have fascinated us as we can see how various rooms in the Mansion were used and divided up.

Christmas decorations for the wards were made from what looks like cotton wool and greenery.

Doctors and the soldiers were playing cards and having a drink showing how they passed the time with Christmas wishes spelled out on the wall behind. It makes you wonder what card game they were playing…

The soldiers are on their beds in their over coats- whether that is for warmth as the house was cold or because they have been outside, is not certain. Santa in the picture may have been part of a Christmas production that was performed or as part of the staff fancy dress dinner. The photo below looks staged for a play due to the scenery and objects in the room. 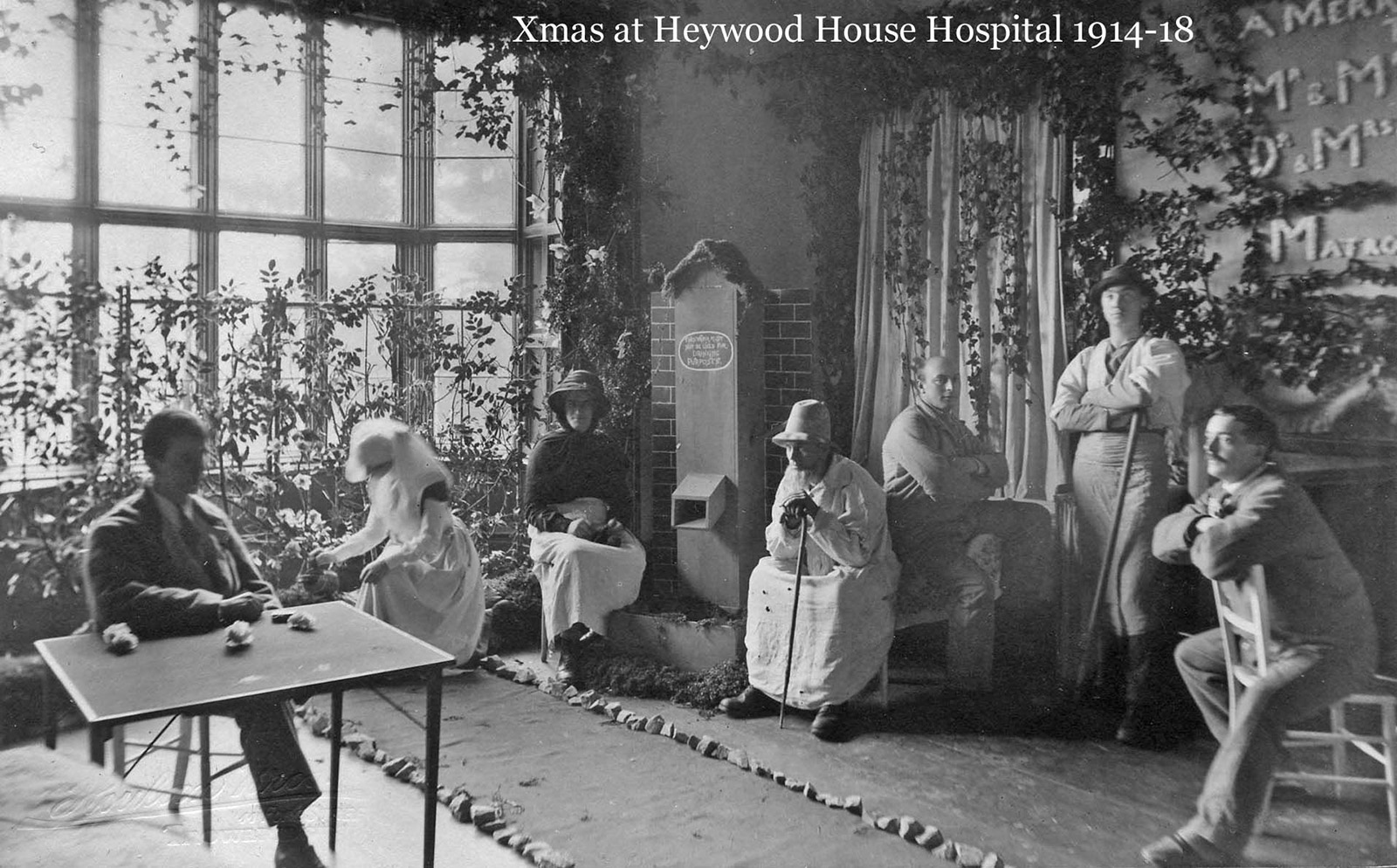 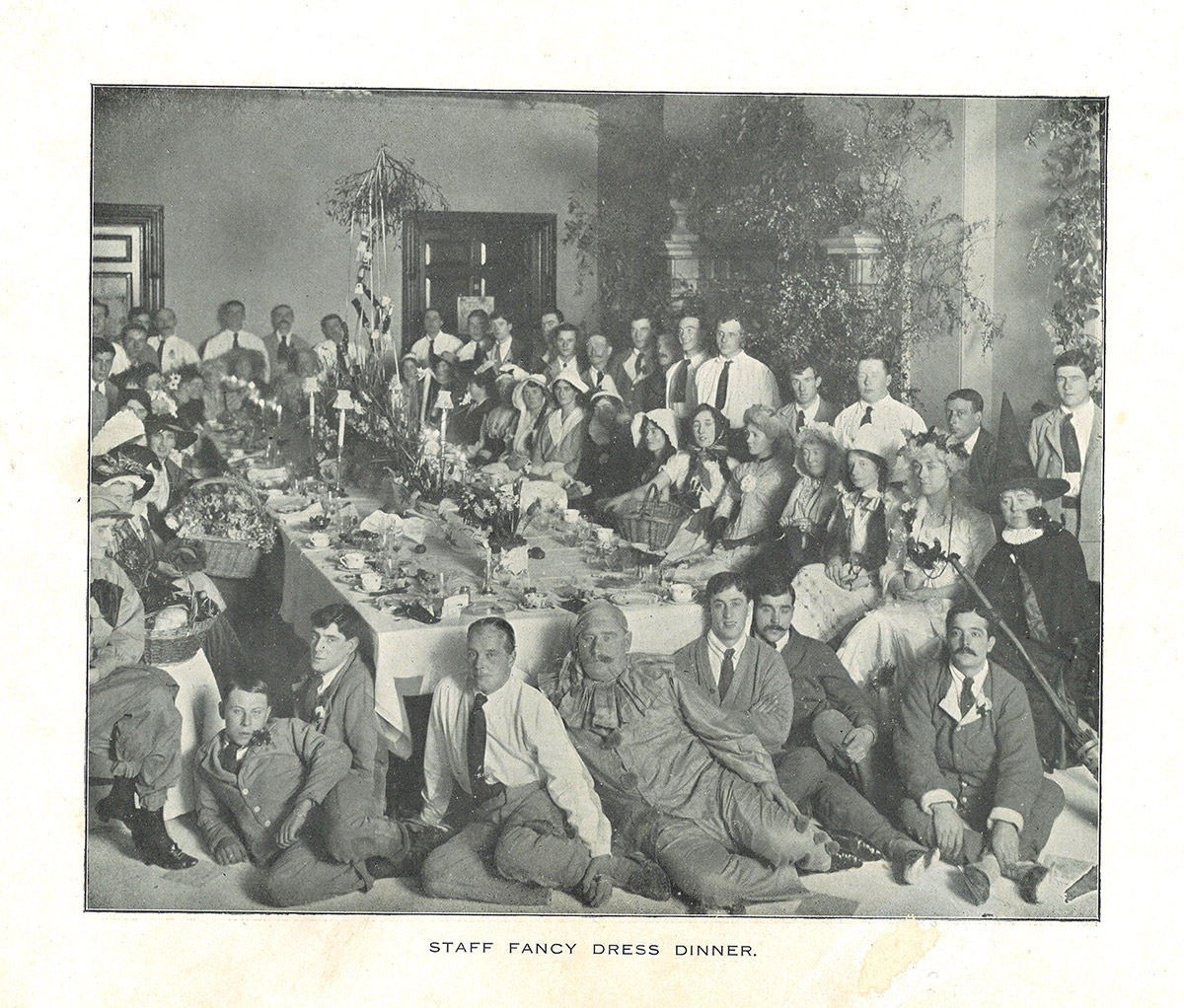 The Main Hall in the Mansion is now used as our Co-Working area. We can see how they used it 100 years ago for the Staff Christmas Party 1917. Some of the people in the photo dressed in their Christmas costumes look very festive!

The wartime story Heywood House tells is one of well-being, rest and recuperation, and we like to think that many of those elements still run true today in the unique working environment that has been created here. Nature, peace and tranquil surroundings are still here as they were 101 years ago pictured in the photos, and it can be just as beneficial today as ever.

It must have been an emotional departure for patients and staff and particularly for Mr and Mrs Lyon when the left the house after the end of the war.

A large number of photos found in our research on the history of the house in this period were from the Wiltshire and Swindon History Centre in Chippenham, which is a fantastic resource. The photos here have been produced with their kind permission. We can highly recommend the centre as a source of information for anyone looking into their local history, family history or starting point for some truly fascinating items!

To keep in touch with Heywood House, you can follow us on our social media channels or why not sign up to our newsletter?